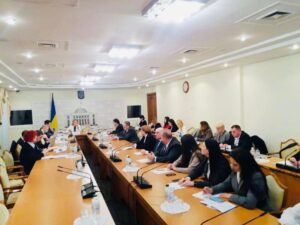 Olena Moshenets, people’s deputy and Deputy Chairman of the Verkhovna Rada Committee on Anti-Corruption Policy opened the event. She noted that the main component of anti-corruption reform is constant and constructive communication of legislators and implementers of the adopted laws. 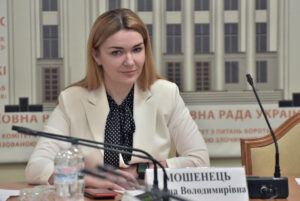 “It is good that the Committee is becoming a discussion platform for the most important issues, which concern not only anti-corruption legislation, but also the impact this legislation is having on other areas, in particular, on criminal proceedings,” Olena Moshenets said.

Valerii Sevriukov, PhD in Law and Head of the Department of Training on Public Prosecution in Court of the Special Training Institute of the National Prosecution Academy of Ukraine, focused the attention of those present on the issues of prosecutors accusation support in criminal cases related to corruption crimes. 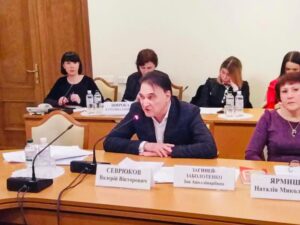 “It is the competence of the parliament to adopt the laws, among others, in the field of anti-corruption policy, which would be useful for our country’s society in general,” Valerii Sevriukov said.

Professor Natalia Yarmysh, Doctor of Law, senior lecturer at the Prosecutor’s Training Department for Criminal Offenses Qualification of the National Prosecution Academy of Ukraine devoted her speech to legislative conflicts and their real impact on the practice of application.

“For example, after amendments to Articles 368-3 and 368-4 of the Criminal Procedure Code, the request for bribery comes from the bribe-giver, not the bribe-taker, although logically it is the recipient who is interested in the bribe,” Natalia Yarmysh exemplified. 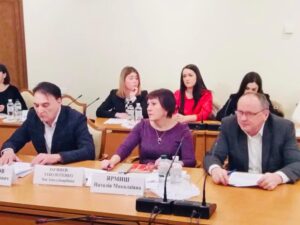 She spoke on other mistakes in anti-corruption legislation and expressed her hopes for further cooperation with parliamentarians for its improvements.

In his speech the Prosecutor of the Specialized Anti-Corruption Prosecutor’s Office Ihor Semak noted that legislators, law enforcement, and anti-corruption agencies are parts of the single state authority, so prosecutors must interpret the law avoiding violation of human rights. 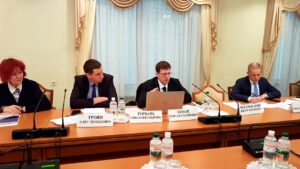 The Deputy Chairman of the Supreme Anti-Corruption Court of Ukraine Yevhen Kruk stressed the importance of adoption of the amendments to the Law of Ukraine On the Supreme Anti-Corruption Court (on the commencement of the court’s work) in autumn 2019, which allowed restarting of the High Anti-Corruption Court of Ukraine (HACC). Thanks to these changes the HACC received just 174 cases from other courts last year, while several thousand were expected. Yevhen Kruk also spoke on the work of the court and its workload in 2019. In particular, according to his words, for 5 months of work in 2019 (from September 5 to December 31), the HACC received 205 criminal proceedings, 50 of them were sent on the basis of judicial jurisdiction and 2 sentences were adopted. Also 3,628 petitions, complaints, and applications were received by investigating judges during this period. Currently, 2,471 petitions have been considered, including 207 (8%) claims that have been closed without consideration on their merits, and 2,264 (92%) claims have been considered on the merits, of which 1,924 (78%) have been satisfied.

Also Yevhen Kruk wished for legislative changes that would allow to increase judges’ efficiency and expressed hopes for further cooperation with people’s deputies on these changes.

The speeches stirred a lively discussion in the audience. The participants offered their suggestions for clear definition of terminology and a systemic approach to amending the codes. The participants agreed to cooperate and discuss the necessary legislative changes together in the future.